It's Go Time for Friday File!

15 days before the final Monument of the season, Il Lombardia! That's on September 29th and promises to be epic! The UCI renamed this great race to Il Lombardia, nicknamed for the Race of the Falling Leaves, has traditionally marked the end of the racing season. No longer. It moves from traditional October to September and makes way for the new Tour of Beijing.  More competitive riders will take part with World Championship form.


It's looking very competitive as the first Men's & Women's TTT is this Sunday. A strong Orica-GreenEDGE team is ready and Svein Tuft is in for the 53.2km TTT. First time since 1994 that there has been a team time trial at the worlds. The Cauberg climb with 2km before the finish will be a stinger for all the riders. Only six-riders per team allowed and Team Director Matt White said, 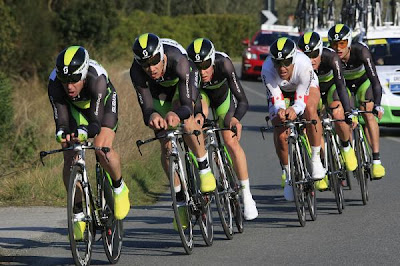 We are going there to win. If all the boys deliver on the day, it is going to take a very, very good team to beat us.


The winning team gets the gold and the entire team receives a special distinctive jersey for the following year. Too bad no rainbow jersey.


In keeping with the World's theme, Canada will be well represented in the men's road race, Sept. 23. Ryder Hesjedal and Svein Tuft will lead the team joined by Francois Parisien and David Veilleux. Perhaps this is what Hesjedal was missing in the London Olympics for success. Fastman, Svein Tuft will also compete in the individual time trial. Also, Dominique Rollin will ride the TTT for FDJ-BigMat. 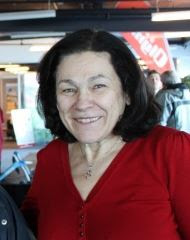 
I'm honored that my 1987 Marinoni was included on the Cycles Marinoni Facebook page. And, it's  good to see a picture of sixty-year old Simone Marinoni, wife of Giuseppe, who probably painted my original frame. The company started in 1974 and she painted frames for 15 years. She has been with the company since it began. The 16 employees are involved during the production phase of all the 1000 bikes per year. Thats their yearly output. The majority of their customers are men but in the last 3 years a steady female clientele has emerged. I know that she applied the decals along with my name on my restored frame... Merci Madame Marinoni!


I discovered this wonderful video from our friends at seriousandstylish.com of a home movie of the 1953 Tour. I know that Jonathan is a film buff and I can understand his excitement for this footage of the Tour. Classic in every sense starting with the publicity caravan, fans and the peloton. Love the bikes with the bidons on the handlebars, tires over the jerseys and riders wearing ...cycling caps! Note: Can you spot 1952 World Road Race Champion Heinz Muller in the pack?


And, as we quickly approach the weekend, I'll spend it watching the world championships, riding with the FRFuggitivi squadra and wish you all a fun riding weekend!

A message to the angry drivers out there! 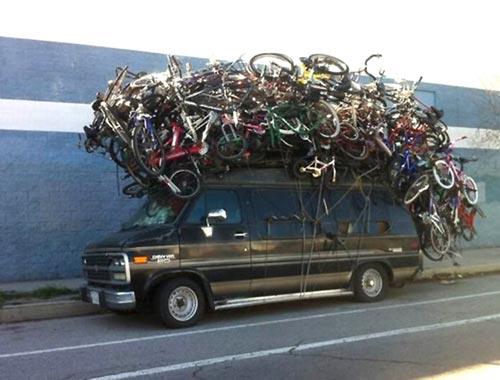