For those of you who are proud Marinoni owners, soon to be or just aficionados of the fine Canadian frame builder...

Here's a follow-up on my Q & A post with Dave, the 'special' owner of his 1985 Marinoni Special. I want to thank Dave and his Uncle Jeff for providing me with some very interesting and humorous insight on Signore Marinoni. I think it's a perfect way to end Dave's Marinoni Special feature and also fitting because on September 30th marked the 75th birthday of Guisueppe Marinoni.

This except is from the original owner, Jeff Yee...

This frame was ordered to replace my Cinelli frame, which was nice but just did not feel right in races. The standard engraving on the lugs and fork crown were the traditional ‘M’ but for a slight price increase could be ordered with either the Fleur-de-lis or the Maple leaves. The fork crown and bottom bracket are Hitachi.

The tube set was a Columbus SL set with a Columbus SP down tube. This was a common practice for Marinoni, sort of his blend to give the frame a little more stiffness.

The original frame color was blue. It was re-sprayed in '87. The standard rear chrome stopped just below the brake bridge. But I asked to have the seatstays completely chromed to highlight the engraving.

The grouppo was originally Campy SR, but I took a chance and wanted to try out the new Mavic SSC since there were so many positive write ups.  In hindsight I should have stayed with the Campy...

Another thing that Marinoni did that no one else did was to stamp the serial number on both the bb and the fork steerer tube. I remember one incident when one of my friends got his bike stolen, and the thief had stripped off all the paint and filed off the serial number on the bb. Then one day he actually had locked up the bike just outside our bike shop, and my friend recognized his frame (even when cleaned down to bare metal) because he had drilled out holes in the rear dropouts. He phoned the cops and proved that this was his bike because of the four digits on the steerer tube! What are the chances...

When he first started making framesets up until the mid-eighties, he was strictly building them for racers and not general population. His location up in Terrebonne was off the radar. You had to know of someone who knew someone to find out where he was. And when you arrived, most of the time you were greeted by Giuseppe himself! Most of the general riders had ordered their frames through dealers instead.

You couldn't tell him how to build up your frame back then. He would ask you several questions, then measure you on his frame jig, ask you what color you wanted and that was it! He was sort of like the ‘Soup Nazi’ on Seinfeld! He was known for throwing out potential clients when they were too demanding.

It was only in the mid eighties that custom work, and paint jobs could be ordered (Alexi Grewal's Pinarello had a lot of influence on how paint schemes would change). That's basically why I had it repainted. Colnago were the first major company to start with the wild paint schemes (they were the first to utilize the cross hatch pattern).


This certainly answers a few questions I had on my 1987 Marinoni. And, it opened up vivid memories for me, of that special time. I would assume my frame is also Columbus SL with the Columbus SP downtube. Unfortunately, I wasn't offered any extras such as the chrome seat stays, Fleur di lys or Maple Leaf fork detailing. Although, I would have gone for the Maple Leaf in a heartbeat. Alas, mine was not a Special model. I'm very glad to know Marinoni was keen enough to stamp both the bb and the fork steerer tube as an added precaution. I knew very little on the Mavic SSC gruppo, only that a few pro teams were using it, ie Cafe de Colombia.

Happily, Campagnolo was my only choice and it came down between the more expensive Super Record or the least expensive Nuovo Record. At that time, I bought two Marinoni bicycles, one for myself and my brother. So, armed with a tight budget I went with the NR, which I do not regret.

On my 1984 trip to Treviso, the hospitable Giovanni Pinarello took me on a tour of his factory where I saw the new and colorful Alexi Grewal 3-tone painted Pinarello's... very memorable.

One final word, it's hard to believe that Guiseppe Marinoni was a sort of the 'Soup Nazi' back in the day. I imagine, with a demanding customer...  he would say,

"No Marinoni for you!" 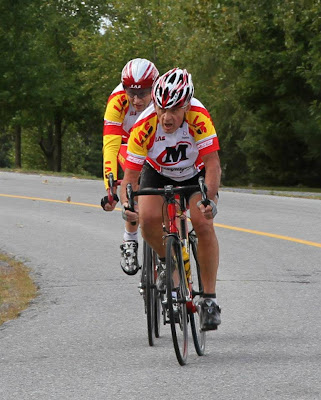