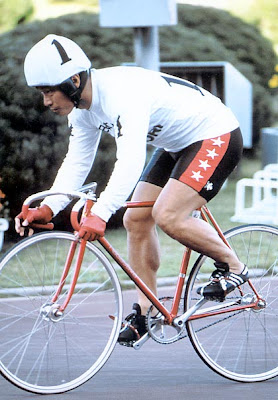 If there was anything that resembled hardcore racing on a track then this must be it.

Motor-paced cycle racing where track cyclists follow a speed-controlled start. The riders, follow the derny (pace-maker bike) for the first few laps of the eight-lap race. The riders are jostling for position but must remain behind the back wheel of the derny. It steadily increases speed before pulling off with two-and-a-half laps to go leaving the riders for the mayhem sprint to the finish.

Keirin is massively popular in the 'Land of the Rising Sun.' Originated in 1948, to help rev up the low economy. The government made 70 velodromes and, notably, to license the sport for gambling. I discovered Keirin is the only sport license for gambling in Japan. To get to the top is not easy, only 10% of applicants are accepted to the Japan Bicycle Racing School where they learn rules, etiquette, skills, and how to gamble. Here are the numbers: reportedly, about 1.5 trillion Yen is gambled each year, equivalent to 15 billion Canadian dollars. Huge numbers. With 47 velodromes around the country providing a gambler's mecca for cycling.

Massively popular and even massively gambled on!

Here's a wonderful video from nowness.com on Keirin: Speed Racers... Inside the High-Octane and Lucrative World of Japan's Cycling Spectacle. Enter the strange and interesting world of the cycling samurai!


*Note: I want to thank Michael for informing me that Keirin is not the only sport license for gambling in Japan... Horse racing and motoboats are the other two!
sprinters steel love video

mob said…
Hi,
this is Michael from Germany / "There is no I in Cyclyng" wordpress blog. I read your posts quite often and found many interesting things to read. As I lived in Japan for 14 years, I was also very much interested in your post about Keirin in Japan. Ther is another great article about Keirin here:

Just wanted to point out a small mistake: In Japan you can (officially) bet not only on Keirin races, but also on horses and on motorboats. These are the traditional three post-war betting sports.

My article is based on what I found online, and I appreciate the clarification. I look forward to reading the cyclingtips article. I haven't travel to Japan and one day would love to go there and watch a Keirin race.