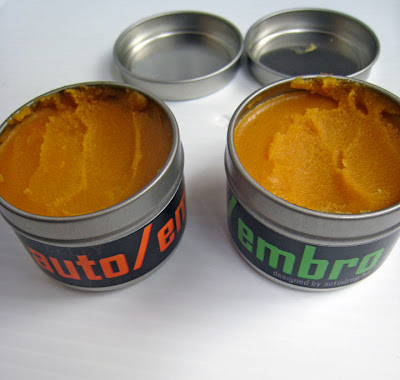 I finally got the chance to ride Saturday. So, I broke away from my work duties for a quick and much-needed spin.

The temperatures were optimal at 9C (48.2 F) cloudy, windy with a hint of rain. Normal Autumn conditions here in Vancouver. More importantly, it was time to use the Embrocation from Erich and Barry of Autodrop Ltd. They graciously sent me two 2-oz tins of their home made Embro for me to test.

I was so eager to use it I tried it last week and the weather gods were against me, it started off cool then turned to rather warm. The moral of the story don't use Embro when it's warm. Oh well, so much for the quirkiness of the Autumn west coast weather.

The day before I shaved my legs, as it's appropriate to wait at least 12 hours before applying it. How do I know? Erich and Barry sent me important instructions, to use it during temps of 35-55F and to remove with dish soap & rag. Armed with this valuable information I opened both tins bearing the unique names of: Pisgah and Uwharrie. I did some research and I discovered a North Carolina connection aptly named for the Pisgah National Forest and the Uwharrie mountain range. Both are a rich mixture of shea butter and beeswax. The scent stands out; Pisgah has a cedar scent and Uwharrie is mint scented. It's rather concentrated so I use a small amount to cover my entire legs. Good touch on the metal tins, a welcome departure on the too common plastic and squeeze tubes.

I admit, I've never used embrocation previously and I had the belief that my legs would smell so strongly that I may turn heads. Well, not quite. The scent is pleasant and not overpowering without being perfume like. And really, where it does matter is the slight burn, and I mean that in a good way, that accompanied me on my chilly ride. I started to feel it's warmth just after applying it. As a result, my legs were more than warm not feeling the cold air. The Autodrop Embro is a worthy and important companion to have on a chilly ride. I'm now looking forward to my next 'cold' one.


Thanks again to Erich and Barry of Autodrop Ltd! 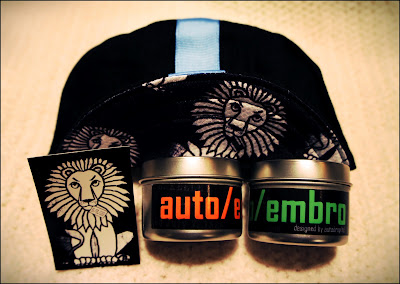 Erich said…
Merci Richard! Thanks for giving it a spin!