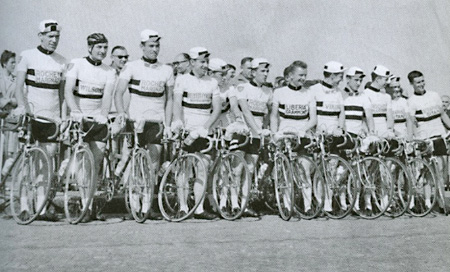 The 1961 Great Britain team at the start of the Tour.


British cycling enjoyed if not the most successful cycling season ever. Bradley Wiggins winning the 2012 Tour, Great Britain's golden home performance in the Olympic Velodrome. It was stellar. However, it didn't come over nite...

And then it was the great Tom Simpson.

In his first professional season, 1960, he finished fourth in the world championship, came within one stage placing of winning the yellow jersey in his first Tour. In the 1962 Tour, he wore the maillot jaune for one day and finished sixth overall. He was a classic star also winning; Tour of Flanders (1961), Bordeaux-Paris (1963), Milan-San Remo (1964) and the Tour of Lombardy (1965). The crowning achievement is his 1965 world road race title. His star status made him the biggest impression in Europe. From the excellent book, 'Roule Britannia' by William Fotheringham...

'Most Frenchmen of a certain age still associated any English cyclist racing in their country with Simpson. At the start of the 21st century, new British stars such as David Millar were hailed as 'le nouveau Simpson.'

Barry Hoban held the record for most Tour stage wins (before Mark Cavendish) at 8. He holds the record by a British rider for most Tours completed - 11 out of 12 (1965-1978). Vin Denson was the first Briton to make his name as a domestique. The first Briton to win a stage of the Giro in1966. His true love was to support. "I loved the idea of being well-respected and trusted, and not having too much responsibility."

The Foreign Legion, as Rupert Guinness called the English-speaking, talented riders arrived in the late-seventies through ACBB cycling club of Paris. The legionnaires were many and some of the big names were: Paul Sherwen, Allan Pieper, Sean Yates, Graham Jones and super climber; Robert Millar made their mark in cycling and the Tour. An English invasion. I'll add the Irish and Aussies, too. Sean Kelly, Stephen Roche, the anti-hero turned hero: Paul Kimmage and Phil Anderson were all former legion members.

In the 1987 Tour, a British team called ANC Halfords competed. Although, they were ill ready to take on the massiveness of the Tour... they did try. Malcolm 'the Sheffield Flyer' Elliot emerged as the only rider of the team to be competitive earning the bulk of the team's prize money in that Tour. He went onto success winning stages in the 1988-89 Vuelta a Espana.

In the nineties, Chris Boardman was the rider influential to increase funding for the Tour of Britain. His 1992 Olympic pursuit gold, breaking the world hour record 3 times, 1994 World Track Champion and 3 stage victories in the Tour propelled him to importance for more funding in British cycling.

Due to the legacy, British cycling success continues Team Sky; Mark Cavendish and Bradley Wiggins. I may have missed out on others who contribute to the British cycling reign but that would result in perhaps in another post.


When we first saw the beautiful British Superfine Wool we knew this would become a classic cycling cap. I said this would be perfect and immediately called it the, Brits winter cycling cap. And, who wouldn't love a 100% wool winter cap? The British have a rich cycling history and I believed, from the beginning, our Brits winter cap was destined to become a classic. You can now see our Brits in November's issue of Bicycling Magazine... Chapeau! 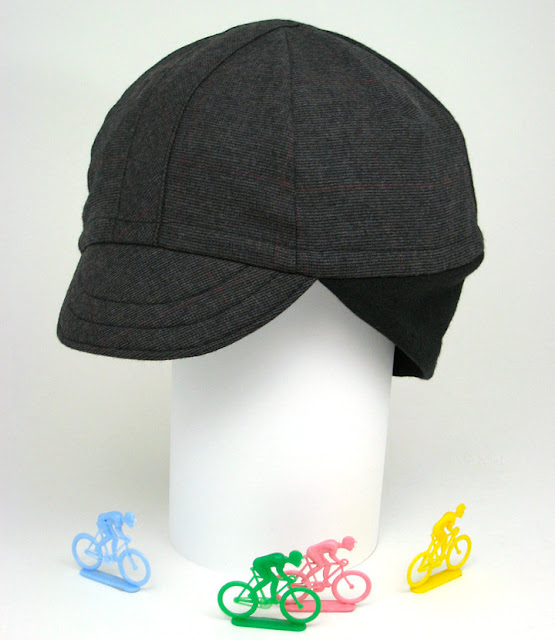