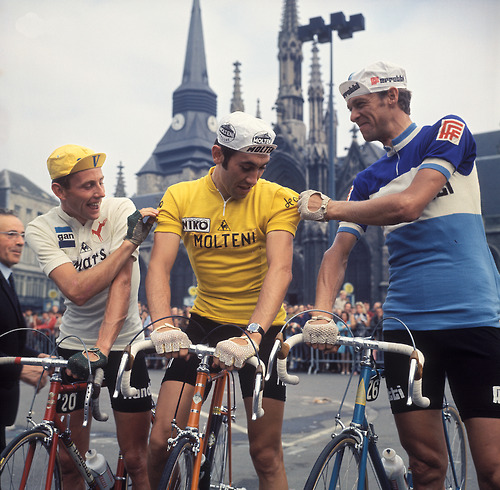 Although I love presenting some of the more heroic images of cycling, there's always the odd non-cycling image that requires some attention...

I admit I'm late in presenting this fun image from the 1971 Tour de France and it's not due to Eddy Merckx or Joop Zoetemelk. It's really because of the third rider. On November 23rd it was the 72nd birthday of the great Swedish rider Gosta Pettersson.

This is, of course, one of those candid moments before the start of the stage. I don't know which stage it is. One thing I find quite funny, more so the smiling Zoetemelk and Pettersson trying to grab the yellow jersey off Merckx. It never did happen as the Cannibal did everything in his super human powers to keep it on to Paris.

Gosta Pettersson turned pro in 1970 at age 30. A late bloomer. He was third in the 1970 Tour and rode to prominence winning the 1971 Giro. He did shine brightly as an amateur. During 1967-69, along with his brothers: Erik, Sture & Thomas won the World Amateur Championships in the 100km Team Time Trial. Add to that; a 1968 Olympic Silver (100km TTT) and Olympic Bronze in the Men's Road Race. An amazing record before he turned professional.

Joop Zoetemelk, wearing the white combination jersey, finished second overall. Gosta Pettersson (Ferretti), in May of the same year won the Giro but abandoned this his final Tour.