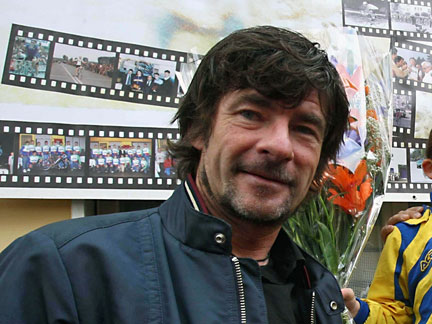 
Gianni Bugno is the president of the Cyclistes Professionels Associés (CPA), the professional riders' association. A man that makes a strong statement wherever he goes.

During his career, the humble rider won Milan-San Remo, Ronde Van Vlaaderen, Clássica de San Sebastián, Wincanton Classic and stages in all of the Grand Tours. His performance in the 1990 Giro d'ltalia was remarkable leading from start to finish to win the overall. Impressive still, he also won  the 1991 and 1992 UCI World Road Race Championships. I discovered he was the last man to win the World Road Championship with down tube shifters. A champion without a doubt. Today, he shares his duties as CPA president and as a helicopter rescue pilot.

He recently attended the London meetings of the UCI (Pat McQuaid) and Change Cycling Now (Greg LeMond). He has said,


The clash between the UCI and CCN is good for the sport if it leads to a new start and sows the seeds for growth and improve things. I think the riders have understood that the sport has to change. We just want that cycling makes a new start, leaving the past behind to focus on the future. The riders have to understand and decide the future they want.


A man that is the conduit between the various cycling bodies and the riders, Bugno will convey his London findings to the riders after Christmas. Until then, I'll be eagerly awaiting the response and I feel a huge 'positive' change is coming for cycling. 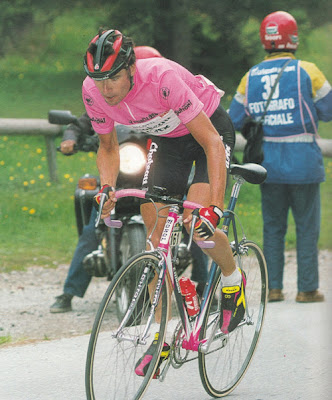 
Here's a few more than interesting quotes from Gianni Bugno,  president of the CPA and former star rider of the 80s-90s.

When asked about electronic shifting,

I don't often use a computer, but when I do, it's not to shift my derailleur.


When I save people's lives, I don't do it by selling yellow rubber wristbands, I do it by dropping out of the sky to rescue them in a badass helicopter.


I don't often sit down to watch professional sports, but when I do, my chair is flying at 200kmh overhead.