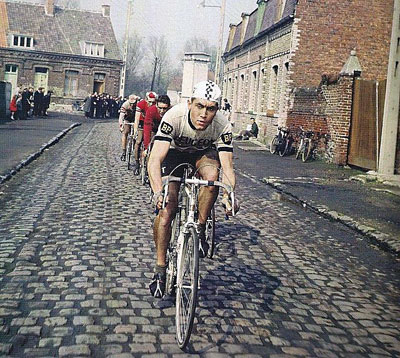 
As I'm writing this Sunday post, a large group of soggy cyclists passed in front of my window. It's 1C very cold, rain turning into sleet. Ah, as I sit nice and toasty warm, outside is the perfect conditions for my favorite miserable, exciting and unpredictable classic... Paris-Roubaix!

This is a lead up before I begin reading my next book, Eddy Merckx: The Cannibal, by Daniel Friebe. It's a natural tie-in.

Merckx turned professional in 1965 with Solo-Superia riding uncomfortably under Belgium King of the classics, Rik Van Looy. The following year, he joined Tom Simpson and Peugeot-BP and made his first attempt in L'Enfer du Nord. He placed 15th behind winner Felice Gimondi.

In my third year as a pro, I slowly started to reap the rewards of the hard work I had put in earlier.

His second attempt in Paris-Roubaix was a learning curve for the young Cannibal. He rode eagerly among some of the elite of cycling : Jan Janssen, Rik Van Looy, Raymond Poulidor, Gianni Motta and Rudi Altiq. Here's a fine video on this 1967 race. Jan Janssen won the race, Van Looy (second) and Altiq (third). Eddy Merckx fought to 8th place. A befitting, gritty, black and white look with an exciting finish.


Hard fought right until the end.