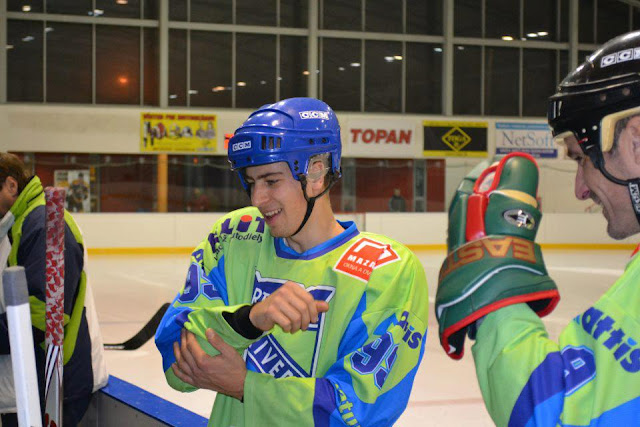 
With the NHL lockout locking out the fans, me included, potentially wiping out the season I'm thinking of... Peter Sagan.

The Terminator is in the news, this time getting ready for his upcoming season. He is also playing hockey. The picture is from his Facebook page in full gear and is he adding this to his pre-season conditioning?

Only 22 years old, he is set with the goal to win a big classic. Last season, he was scary good with the promise of sterling greatness: a series of top-five finishes in Milan-San Remo (4th), Ghent Wevelgem (2nd), Flanders (5th) and third in Amstel Gold. I predict a classic win will be his this upcoming season. He may be the next big thing since Merckx.

Eddy Merckx won his first of seven Milan-San Remos in 1966. He was 21 and this kick started his 10-year cycle of dominance.

Once he gets his first big classic win notched... the new Cannibal will have arrived!

You don't see many cyclists that are dual athletes in two professional sports. Peter Sagan was great last year, and he can only get better as he matures as a cyclist. His trademark no handed wheelie's are something most road cyclist's never pull off.
December 31, 2012 at 10:34 AM