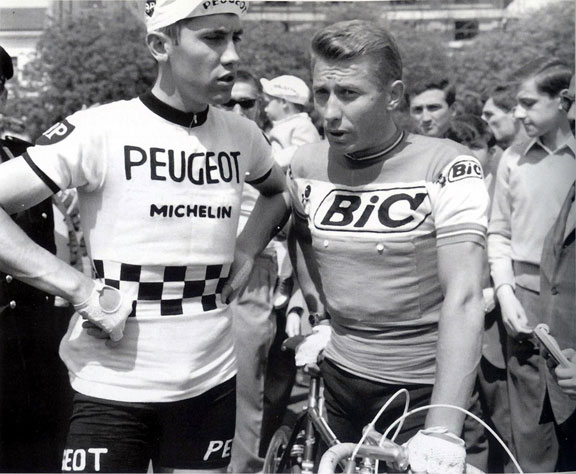 For Eddy Merckx, 1967 was a blossoming for the 22 year old wunderking.

He started to turn into a ... Cannibal... with impressive victories; World Championship Heerlen, Milan-San Remo (his second), Ghent-Wevelgem, Flèche Wallonne plus 22 others. His first Grand Tour, Giro d'Italia, was an eye-opener that was part of his blossoming. Winning two stages including his solo ride to Block Haus was his first stage victory. His ninth place in GC was a claim to fame, a call that according to Merckx,


It was dawning on me that I probably had a future in stage races too.


As the young Merckx moved up cycling's ladder, Monsieur Chrono Jacques Anquetil was on the decline. His championship form was still there, for all to see, finishing a gallant third in the 1967 Giro. Like the young upcoming Merckx, Anquetil also shared a hunger to win, inherent in both.

Anquetil was also ravenously ambitious - but in a way that couldn't have been more starkly juxtaposed with Merckx. Born poor, the Frenchman hoped to get rich, and realised that he could do so thanks to his one extraordinary talent: riding bicycles. 'I was inestimably lucky. I didn't have to fight my way up because I became a star very quickly, but if I hadn't succeeded, I'd have really scrapped and I'd have become a star anyway.

When I look at the image above, I pause to reflect and sense that the torch is being handed from one great champion to the next champion.