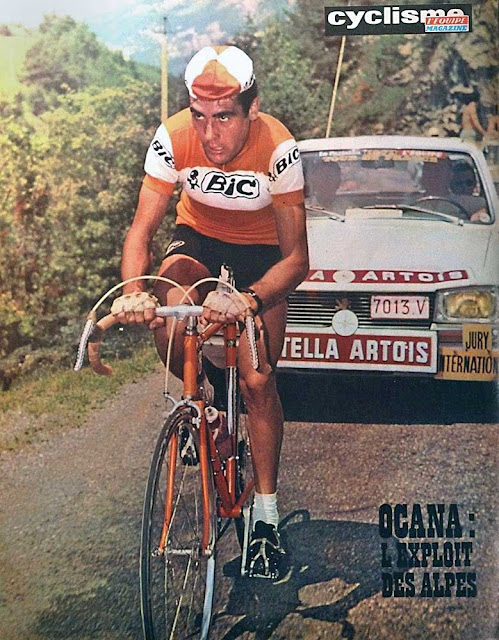 That hero is Luis Ocana. Probably the only rider to give Eddy Merckx a run in the 1971 Tour. Before that Tour he showed glimpses that he was worthy to dethrone the Cannibal from his Tour throne. He finished third behind Merckx in Paris-Nice and second behind Merckx in the Critérium du Daphiné
Libéré.

On stage 8 was a masterful attack by Ocana that left Merckx unable to chase to win the stage thus gaining precious time on Merckx. On stage 11 Grenoble to Oceires, a more masterful attack that left the peloton reeling, Merckx included, and soloed to victory. Merckx was distanced finishing in fourth almost nine minutes behind Ocana. Merckx was so distraught that he was ready to give up his chance for a third Tour victory. Ocana was the real deal.

During the fourteenth stage to Luchon, a heavy rain storm caused a calamity as now race favorite Ocana fell on a descent and Joop Zoetemelk punctured running into him at full speed. Ocana was seriously injured and abandoned giving up his yellow jersey to Merckx.

A description of the toughness and frailty of Ocana comes from the superb book, Eddy Merckx: The Cannibal by Daniel Friebe.


Merckx was the king at the time, but we felt that Luis, with the ability he had in the mountains and the ability he had on the flat above all, was a possible Tour winner. He wasn't explosive but he was enormously strong. When he accelerated, it took him a while to open up a gap, but he went so fast that he blew everyone off his wheel, one-by-one, until no one was left. He could climb in the saddle, with his hands on the drops, and just batter people. He had these, big, rippling thighs and I think he must have produced about as much power as anyone in the peloton back then.

He was a very fragile, sensitive character. Sensitive to everything, even success. I personally think that he was very bad at dealing with pressure, right from the start. Sometimes he was on a cloud and sometimes he got out of bed and nothing was right with the world. Back then, going to the Tour de France with Luis as our leader was a big step into the unknown.


A combination of toughness, frailty and bad luck for Ocana... his luck would change in 1973.

Flemish Canadian said…
Merckx showed great tribute to Ocana in refusing to wear the yellow jersey the next day...
January 3, 2013 at 8:49 AM

Flemish Canadian said…
The following day Merckx refused to wear the yellow jersey, in tribute to Ocaña
January 3, 2013 at 8:49 AM