Is it too early in the season to give a righteous acknowledgement to some cyclists at the Tour of Oman?

Peter Sagan is riding well to win two stages only to have the climb of Green Mountain stop him from a third successive stage win. At least for now. He lost the red leaders jersey to Chris Froome, who is looking very good in what will be an exciting ending with only two stages remaining. Cadel Evans is second and showing good early form especially being away from racing for five months. His past problems seem to be behind him and a good thing too as he celebrates his birthday.

Alberto Contador (3rd) and Vincenzo Nibali (4th) and stage winner J Rod (5th) shows potential stage race threats are going well. I know it's only February, but kudos go to them. One rider that deserves mention is young rider, Kenny Elissonde (FDJ) in fifth overall. Last season he was a stagiaire for FDJ, the little climber (reportedly 5 ft 6 1/2 in, 110 lb) can ride with the creme of cycling. We will soon find out whether Joaquim Rodriguez solidly wins today's queen stage with a smile... let's hope he has one this Friday after the ruling from CAS whether Katusha goes to the WorldTour. 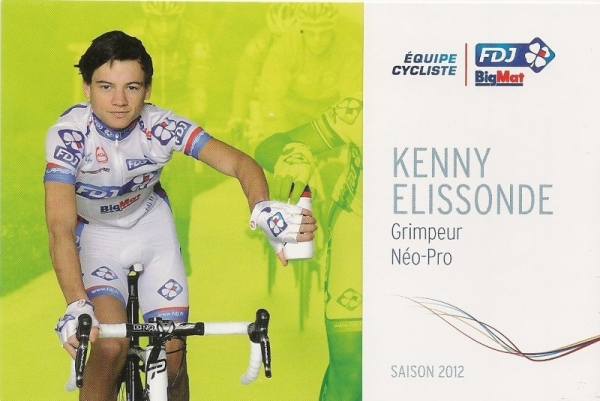 Looking like a boy on a bike.
Only 21 years old and a rider to watch...
Kenny Elissonde.
courtesy Jack Claassen
cyclingarchives.com