Oscar Gatto: This Cat Loves the Cold & Claws Back 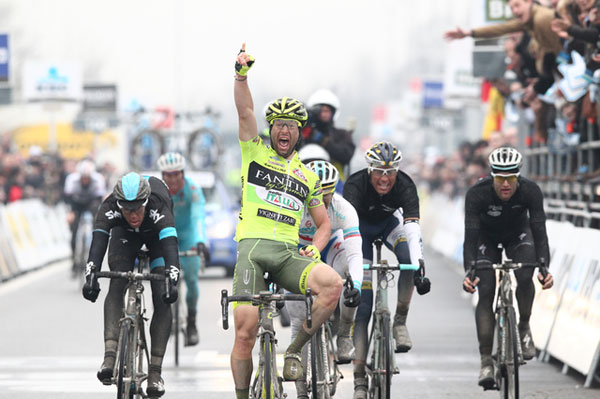 
This morning I watched, with much anticipation, the opening race of the Flemish cycling week...

Dwars door Vlaanderen starts my favorite part of the cycling season with hard core one-day racing. And, it keeps on going Belgian style with E3 Harelbeke (Friday) and Ghent-Wevelgem (Sunday).

The action happened six kilometres from the finish as Thomas Voeckler grimaced his way to certain Flemish victory. I watched the straining then slowing of the tough Frenchman and I wished he could pull out the win. But, against a hungry Gatto - there was no way to stop the Italian from clawing out of the chasing group for an impressive victory.

I learned that he was the first ever Italian rider to win DdVand a great victory goes for his Vini Fantini Selle Italia Pro Continental team. What I found equally impressive is this cat was one of the few not to have leg or arm warmers on even gloves on. Gatto said, "The cold was no problem for me. If you race you don't feel the cold and in the finale we were going flat out. I didn't need the clothes."

A Flandrien Gatto is born!