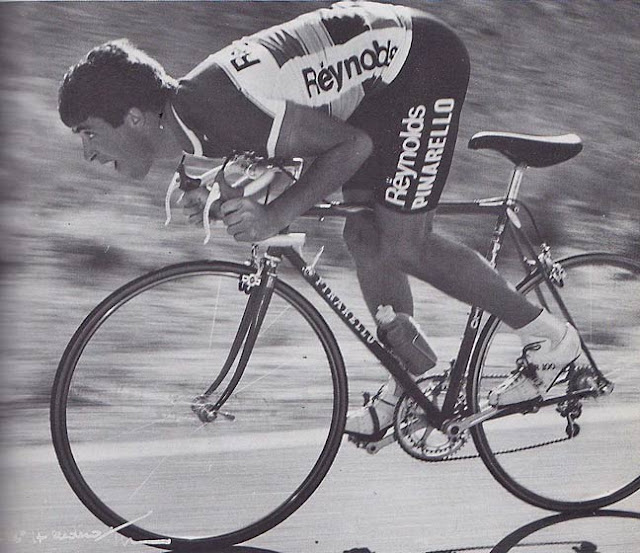 Putting the 'F' in FEARLESS...
Delgado the Daredevil in 1983,
via CampagnoloSrl

I love the internet for the vast information and sweet surprises.

I'm talking about my endless search for the ultimate image of 80s and 90s Spanish cyclist Pedro Perico Delgado. He was one of many stylish cyclists that made me sit up and take notice. The image that is engrained in my subconscious is him barreling, like a bullet, down a col. During a stage in the 1983 Tour de France after passing Colombian Patro Jimenez, made a great impression descending like a kamikaze.

I admit to hopelessly looking online for Pericos' daredevil image and never found it ... until now.

Huge thanks to CampagnoloSrl for the cool image of Perico clenching the drops in full flight. Looking at the Pinarello and jersey gives me a clue that it's 1983. Hard to say if it's a competition image... there's no number plaque.One thing I can say is that I tried to emulate this, back in my younger days, successfully for only a very short time. Fear of losing my balance and falling to an ugly bloody heap deterred me to continue. This image of Delgado oozes fearlessness. I'm not a fearless rider, far from one, but I do appreciate riders who are. I believe the 1983 Reynolds team was supplied with Pinarello Super Record SLXs. After watching Perico descend kamikaze style, it made quite an impression on me. The following year, I decided to go to Pinarello in Treviso. I met Giovanni Pinarello and he graciously gave me a unique tour of his amazing factory.

What an experience for a young cyclist from Edmonton. I bought the authentic 1983 Reynolds team jersey made by Basque based, Etexondo. One of those coveted treasures I still own and on occasion I will go for a ride with it.

Whenever I descend I imagine the Perico inside me striking that fearless pose.