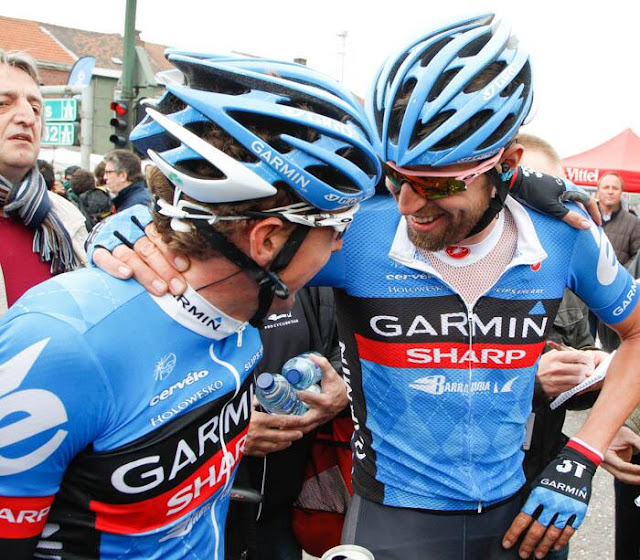 The one-two Garmin punch that knocked the lights out of everyone.
Note: A confident Hesjedal wearing pink Oakleys... surely good pink things to come!
via Slipstreamsports


The dynamic Garmin Sharp team pulled one from out of their collective hat to win a thrilling and gusty monumental victory in Liège-Bastogne-Liège. 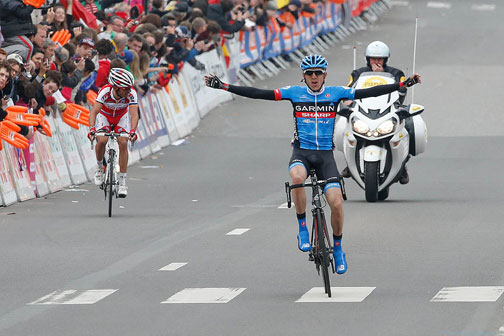 I remember Dan Martin tweeted after narrowly been beaten for third in Flèche Wallonne...

"Gutted to be so close to the podium today. Literally 2 inches."

DS Johnny Weltz used an old tactic, "Today we had a plan similar to Fleche with Ryder and Dan as our team leaders. There (on the 2nd to last climb) we had a plan with Ryder to attack; and he certainly did causing a lot of damage! He was on the front with 5 of the strongest riders in the field but they didn't work with him, so he just attacked them and stayed away to the last 3 km. Finally he was joined by a small group of strong riders that Dan was in as well. Dan could sit all the way to the final kilometer and benefit from an amazing ride by Ryder who paved the way for Dan who finished it off with a great sprint."

Ryder Hesjedal rode like a power-forward (hockey metaphor) to keep the pace high with the breakaway group. His form is very good leading up to the Giro, almost scary. His attack was. I believe it when Guy tweeted, "Does Ryder H have a Classics beard, or maybe a Playoffs beard? By the way NHL hockey playoffs is about to start and Ryder knows a thing or two about hockey... 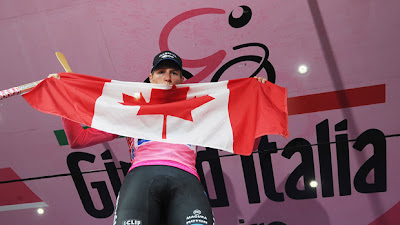 Inside the last 400 meters, Martin rode pass Purito Rodriguez and became the second Irishman to win Liège-Bastogne-Liège since Sean Kelly in 1984/1989.

Was it meant to be? DS Eric Van Lancker, winner of the 1990 L-B-L, "The morning (Sunday) Dan said to me, 'The first time Sean Kelly won the Tour of Catalunya he also won Liege and I said, 'Ok, then it's clear, now you have to win Liege' and he did it! It's the small things that work on your mind in the run up to a race like this."

Dan Martin goes on a deserved vacation and Ryder Hesjedal rides in today's Tour of Romandie as prep for the Giro... the boys in blue are looking good.