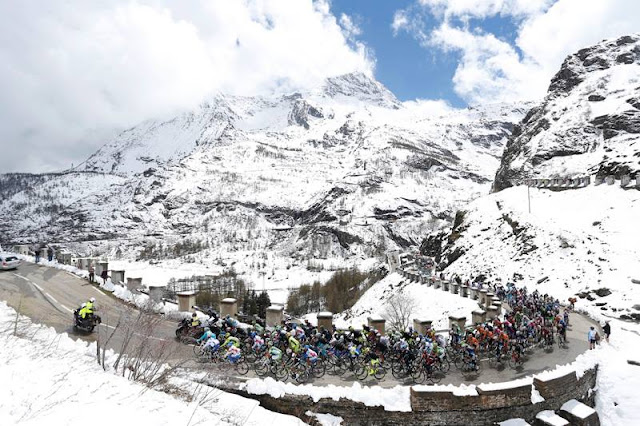 The Giro is turning out to be a test whether Vincenzo Nibali will ever falter off his pink perch.

Enduring this particularly brutal Giro has been taxing on all with two notable abandons; Wiggins and Hesjedal. The cold and wet as just cause to wreak havoc on the immune systems to infection. For Sir Wiggins struggled with a head cold and chest infection that force his withdrawal. Today, we finally found out that Ryder Hesjedal suffered from an upper respiratory tract infection (sounds familiar). Team physician Phil Stawski news release stats, "It appears that Ryder had been exposed to the virus affecting many in the peloton during the first week of racing."

This upcoming Friday/Saturday are two feared mountain stages that will give the riders nightmares. Friday presents the Passo  Gavia, Stelvio (Cima Coppi) and Val Martello climbs and Saturday, well only the strong will survive; five brutish climbs finishing up the mythic Tre Cime Di Lavaredo.

The crazy cold weather is the real culprit causing abrupt changes; too much snow and the elevated worry for the riders safety. If the snow threatens, there's already some talk that RCS Sports is thinking about cutting the Gavia and Stelvio passes out of Friday's stage 19. I hope the snow subsides just enough for us to witness the drama.

It's too early to tell whether we will see Sir Bradley and Ryder at the 100th Tour de France. If they do show up what kind of form will they have? Will it be enough to help their respective teams battle for supremacy? One things for sure, rest is high on the menu and ...watching the final outcome of this brutal and exciting Giro. 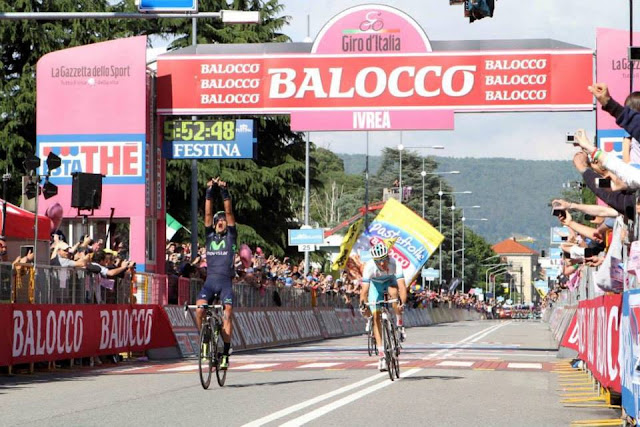 Today's stage 16 to Ivrea was marvelously won in fine fashion by Benat Intxausti. Dedicating his win to Xavier Tondo, who died tragically almost two years ago. Intxausti said, "It's May 21st today and May 23rd is sad but special day for me because it's the second anniversary of what happened. I'm sure he would have celebrated my victory and so this win is for him, my grandfather and my team."

Here's a video from the race doctor about how the brutal conditions have tested most of the riders and the doctor on duty has his hands full.