The Gospel According to Jens & Cav Hits a Century 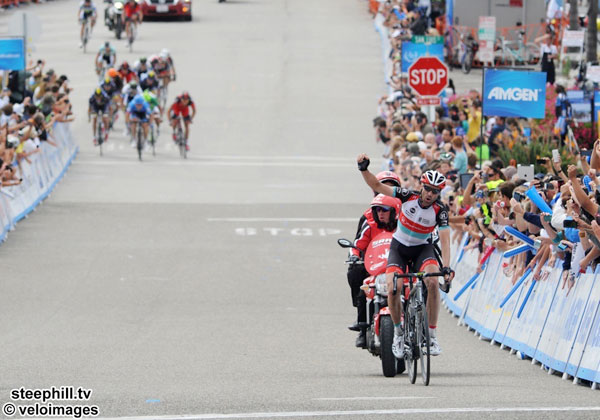 Jens Voigt fooled the sprinters, took them out of the game, and attacked inside the last 5km to win stage 5.

I've been looking for some famous last words, and I think found it. The gospel according to Jens...

"That move, basically, since many, many, many years. Almost since the last ice age I've been doing the same move. Sometimes, like in Colorado (2012 USA Pro Challenge), I do it with 140 kilometres to go, and today, with five to go. They know what my plan is. They know I cannot win a sprint. They know I have to be alone. You've got to catch them by surprise. They watch each other. Peter Sagan looks at Hushovd; Hushovd looks at Tyler Farrar. And they go, 'yeah, it's just old Jensie, let him go.

It's almost like a voice talking in your head. 'Go now. It's now or never. It's now, it's now'. And then you listen to that voice. And I think maybe they underestimated me and they say, 'Oh, he's going to die out there. He's going to slow down.' And, yeah, it played in my favor. I guess I'm allowed to say, every now and then, I do still have a little bit of go power... And once I'm out there, once I can see and smell this victory, it's hard to get it away from me."

I'm glad we have Jens Voigt still riding. He animates the race with his high spirits - the man is 41 years old. When asked what rider he'd tap to replace him, he said: " I think it would take maybe two persons. One to do the funny part, and one to be the bike rider."


Slick and classy win, and NO it's not time for retirement... Jensie!