Anquetil: 'Take The Bidon Out Of Its Holder.' 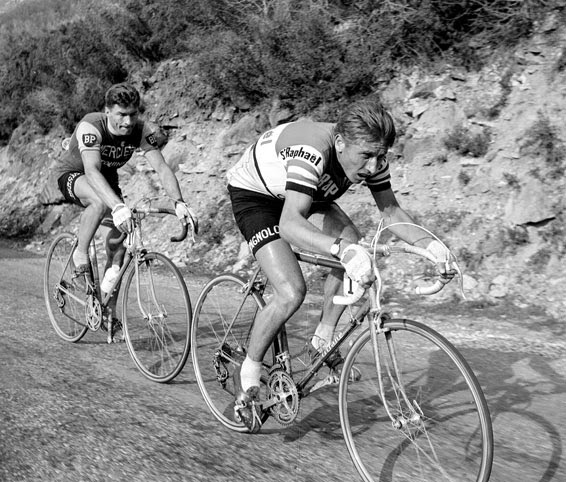 Next Saturday will start off the 101st edition of Le Tour de France and what better way to ring in La Grand Boucle with a water bottle story of Jacques Anquetil...

"Jacques Anquetil, five-time winner of the Tour de France, used to take his water bottle out of its holder before every climb and stick it in the back pocket of his jersey. Ab Geldermans, his Dutch lieutenant, watched him do that for years, until finally he couldn't stand it any more and asked him why. And Anquetil explained.

A rider, said Anquetil, is made up of two parts, a person and a bike. The bike, of course, is the instrument the person uses to go faster, but it's weight also slows him down. That really counts when the going gets tough, and in climbing the thing is to make sure the bike is as light as possible. A good way to do that is: take the bidon out of its holder.

So, at the start of every climb, Anquetil moved his water bottle from its holder to his back pocket. Clear enough."

- Tim Krabbé. From his book, The Rider. 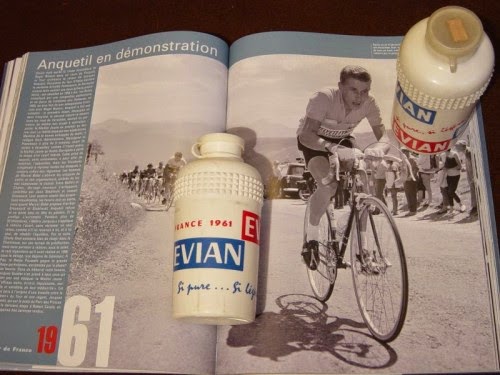 Unknown said…
Nice story; of course it would have given him the edge over his rivals if he believed it would!
I cycled around the world an took with me a Jaques Anquetil water bottle. It was an antique when I got it in the late 70's. White bottle with dynamic picture and red top. The top plastic was very flexible so easy to open and gulp. plus I used to cycle on lemon tea. sadly I threw it as the lid retaining tie broke off.
Seems I can buy a new old one on french ebay (Bidon Jacques ANQUETIL) for only 80 euros!
BTW every picture I could find of Jaques Anquetil climbing (col grimpeur) his bottle is in the cage. It would be interesting to find a picture which would back up this tale.