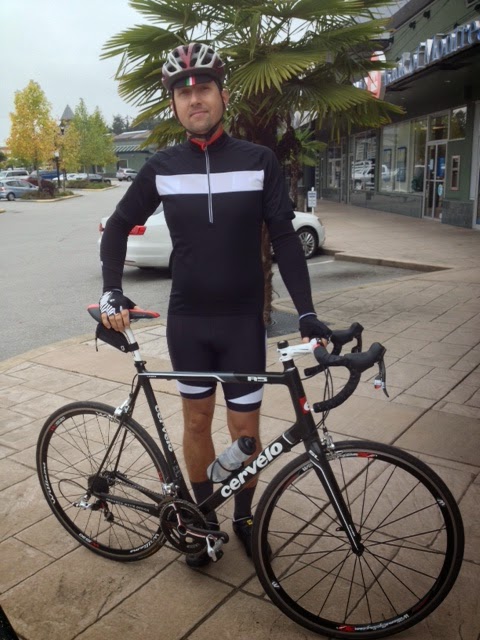 I never thought injuring my achilles tendon would keep me 'sedentary' off my bike. By that, I mean I'm still capable of riding, but at the moment, only at reduce miles. It has been seven long weeks since riding with the FRFuggitivi guys and I was itching to get back to ride. Thankfully my achilles is recovered and I eagerly joined our Sunday final ride of the season to Tsawwassen and return with a surprise. I'll get to that later.

The pancake flat course suited me and I'm sure for the rest of the guys too. In fact, this Fall ride was most welcome for getting back in touch with the gents. Notably, Ross rode his new very sleek Cervelo R5 (only his second ride). He mentioned to me that his R5 rides amazingly but he feels that he has to 'control'  it. He recently rode up Burnaby Mountain and he is very happy how it easily zips up a climb. This Canadian carbon bike looks amazing, like it can fit in comfortably in the pro peloton. A few of us were wondering if it met the UCI weight standard. Of course, we were more than happy to have Ross carry our water bottles to off set the difference. The Lower Mainland never ceases to amaze me for the tranquil farm roads made idyllic for pleasant riding.

But then, the bicycle gods enacted a cruel fate upon me and I front flatted whilst off the Alex Fraser bridge. This bridge is notorious for road debris kicked from the bridge deck to the walkway. We stopped and I dug out a piece of tire belt still impaled in the tire.

Belted by a steel belt.

After replacing a new tube I began my ride only to notice a troubling wobble. With encouragement from Curtis and also by a stroke of common sense, we both stopped to successfully re-seat the tube. Off the back from our pack, I appreciate the 'domestique' like support from Curtis and Guy to wait and lead me to our final destination.

Rolling to Steel and Oak Brewing was the perfect reward after our 77 km ride. It was my virgin visit to this casual local brewery where I enjoyed their flite in this order: Radler (lemonade/beer), Smoked Hefeweizen, Smoked Lager and Pale Ale. The Radler is unique and a first for me. The sweet lemonade beer made for the perfect after ride sugar replacement tonic. Our Fall/Winter rides will be somewhat sporadic and more ad hoc switching to Saturdays. As soon as we left, the bicycle gods were not done their dirty work yet - Guy discovered a rear slow leak. Thankfully he was only 5 minutes from home.


The way I see it, we had a pretty good day on the saddle, toasting the last season ride with excellent beer and taking care of whatever the bicycle gods throw at us. 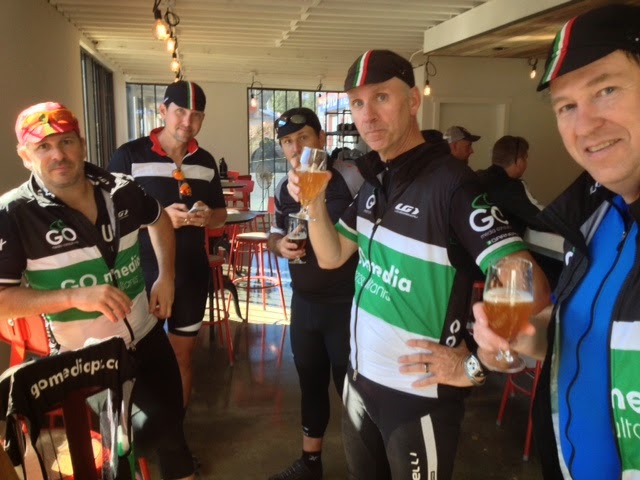