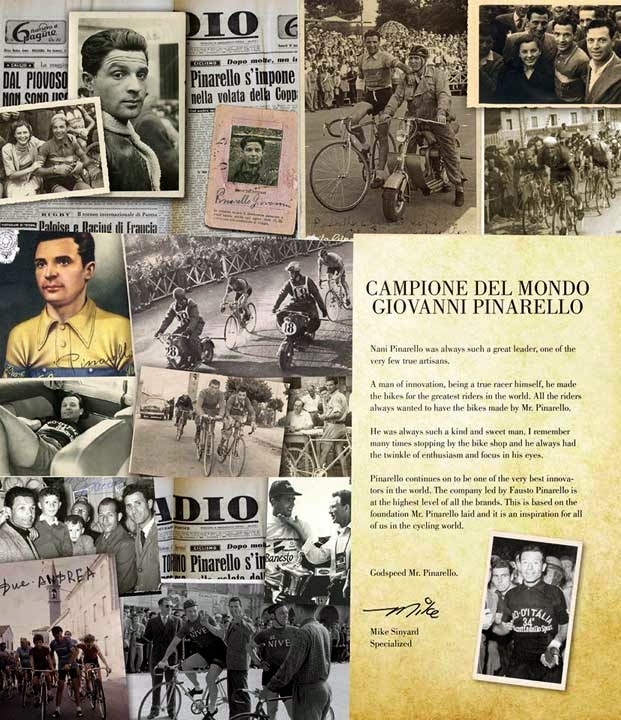 I had the pleasure of meeting Giovanni Pinarello in Treviso back in November, 1984. Hard to believe it's thirty years ago now. Pics and story here. All I knew of him was he made coveted frames admired and prized by the world's racing community. He raced in what was called the 'Eroica' era - the heroic period of 1950s  Italy where the majority of the roads were scarred by the war. Giovanni Pinarello wasn't the sort of rider with a shinning pal mares (9 pro wins). However, he was famous for winning the 1951 Maglia Nera, the black jersey for the last place rider in the Giro d'ltalia. An emblem of distinction. So prestigious this distinction that riders were know to flatten their tyres or take a long beer break for the coveted jersey.

Then a turn of events happened to him. After gaining fame with the maglia nera, he was let go from his Bottechia team the following year. In compensation for giving up his place on the team for a stronger cyclist, Pasqualino Fornara, Pinarello was paid 100,000 Lira. This was enough for him to start his own bicycle shop. In 1953 he opened Cicli Pinarello, with an artisan's approach, to frame building. He shot to fame when Fausto Bertoglio won the 1975 Giro on a Pinarello bicycle. And, throughout the years Pinarello bicycles were ridden to magnificent victories by some of the world's best roadmen.  It continues on as Bradley Wiggins is the latest to win on a Pinarello to victory in this week's world ITT in Ponferrada. 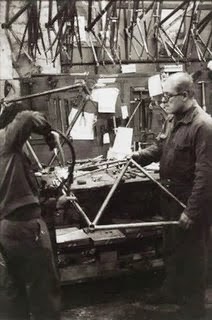 I can remember Giovanni Pinarello happily taking me through his Treviso factory with gleaming bicycles hanging above us waiting for shipment throughout the world. I saw the distinctive 3-color replica bike won by Alexi Grewal in the 1984 LA Olympics. I never saw him actually weld a torch but supervised and hovered over his staff as le patron. I marveled at his busy bee workers building Columbus steel bicycles in probably the most crowded but orderly factory ever. And to think a few of these gorgeous bicycles were destined to a few pro teams.

For me, I am ever grateful to have met the genial and hospitable Giovanni Pinarello... the iconic frame builder of Italian cycling. 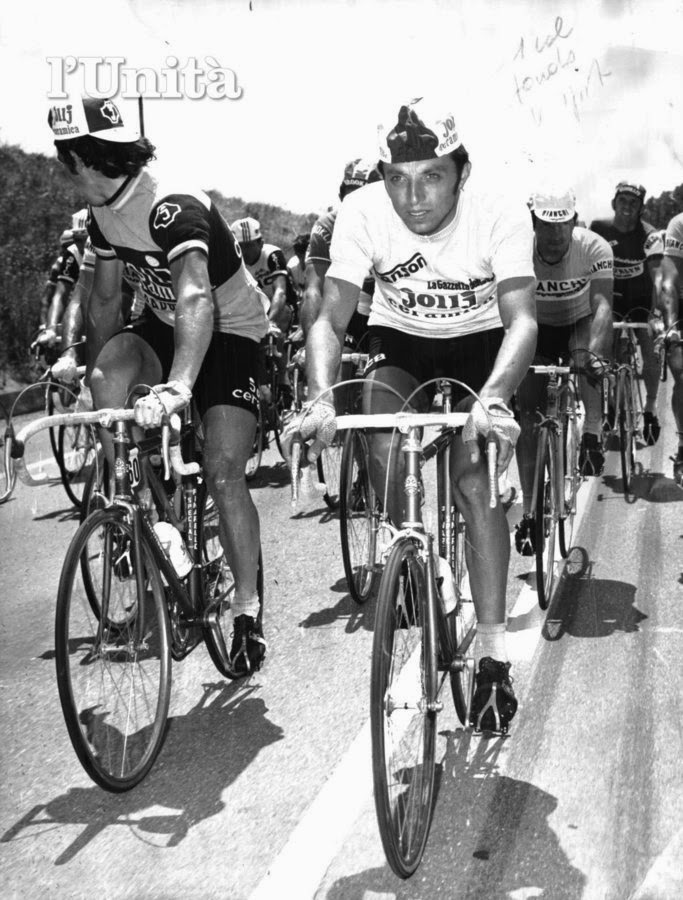 A breakthrough for Fausto Bertoglio and Pinarello, 1975 Giro
via l'Unita 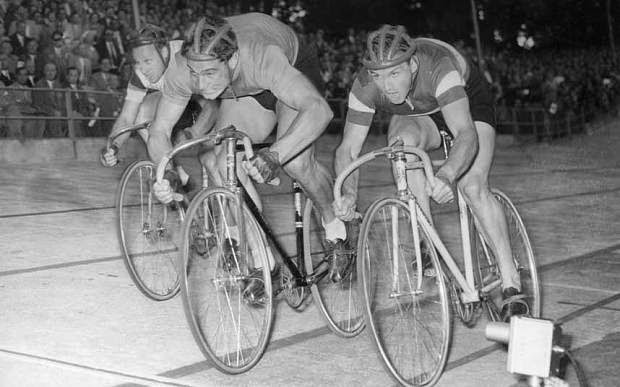 Like many riders of his era
Giovanni Pinarello (far left) was an avid trackman.
photo Alamy 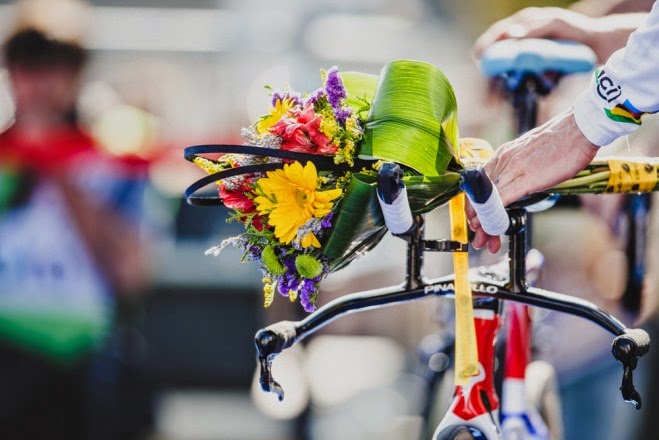 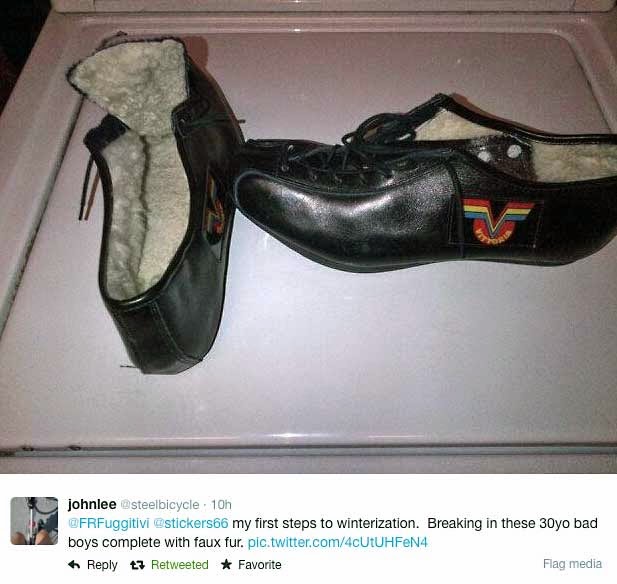 Fall has started and my Frfuggitivi teammate, John has taken his first steps to winterization. I always thought that John was from another era; he rides with toe clips and 30 year old leather Vittoria cycling shoes. The type of rider that would look at home with a tyre wrapped around his back, wearing a wool jersey and wearing a leather hairnet on dusty Tuscan roads. Forza John! 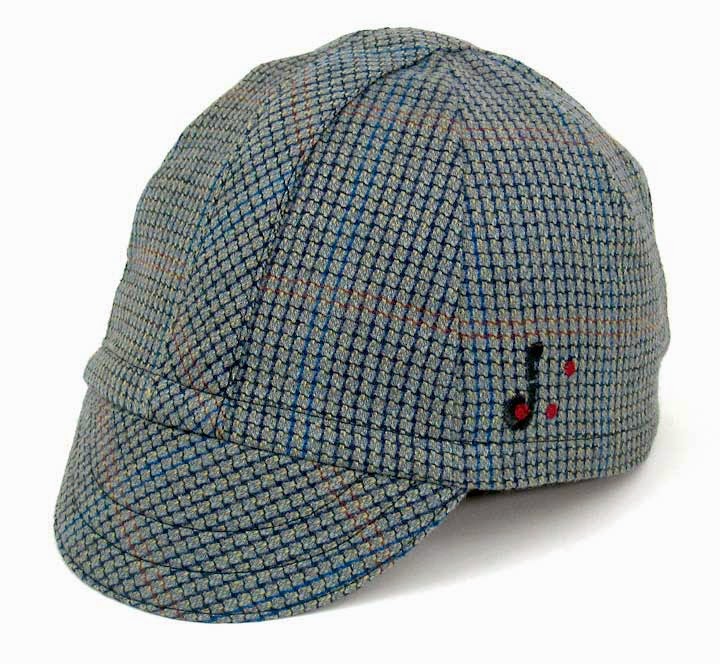 For when the weather is cool this uniquely handmade 100% wool cycling cap is the perfect solution when a full winter cap w/flaps is too much. Now available! 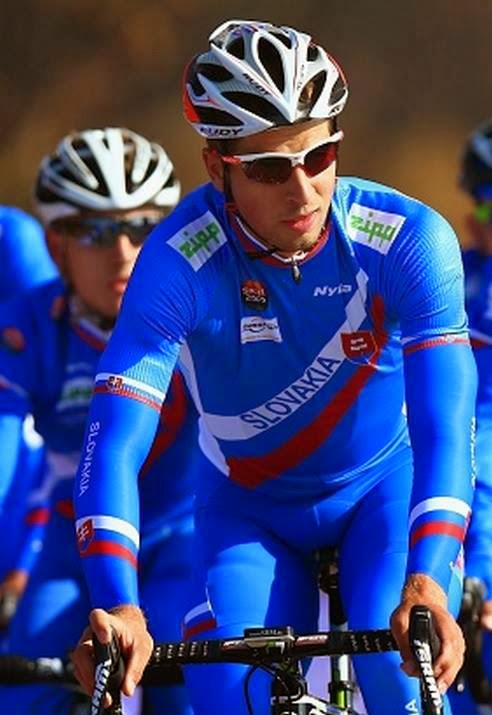 Waiting in the wings?

Probably the mystery rider for this Sunday's Men's world road race is Peter Sagan. Yes, he won the green jersey in the Tour de France, signed for a huge salary for Tinkoff Saxo but has had a quiet season. He doesn't have the support of the well armed teams like the Spanish or Belgians but he is a force to beware of. Could his quiet season be just a smoke screen for Sunday? He'll be my pick for gold along with the equally fast Greg Van Avermaet for silver and Alexander Kristoff for bronze.