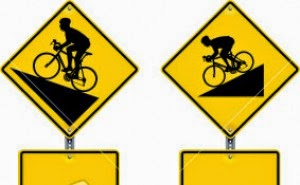 Yesterday was unusually sunny (10C) and warm for February. So, an unofficial FRFuggitivi ride was on, destination: Pt. Moody. I eagerly joined Guy, Patrick and Curtis to touch bases, enjoy the witty banter and get some badly needed mileage. At our mid way point we stopped for a customary doppio where Patrick showed me, on his smartphone, an aerial view of our goal. It was Gatesnbury hill. I never heard of it. But, I remember Patrick saying it was... steep. I should have heeded his warning. Never to say no to a challenge I was game, believing my 39X25 will carry me onwards. It has so far.

What transpired next was a humbling experience. At the foot of the climb it was a single lane snaking upwards with only a side gutter to ride on. The car following behind us tried to pass, had to slow to a snails pace until we found a wide enough shoulder to ride on. I was already in my 25T. A bad sign. I was distance from the rest of the guys and doing my best impression of staying upright. I knew if I stopped I would go backwards. A comedic image of Wile E. Coyote going dreadfully backwards to a messy fall flashed through my mind. I tried weaving side to side, thankfully with no cars following, to no avail. A crazy defense mechanism kicks in. Under duress, I was hoping to find a way to keep riding and survive this damn hill. Where's that team car when you need it? This is probably the steepest I've ever climbed, or attempt to (Indian Arm runs a close second). Enough was enough, I decided to turn around. As it was steep going up - going downwards was another story... I'm glad for good brakes.

I thought I could climb this steep hill, and humbled failing to do so. Even with the correct gear ratios, I know I would never attempt this again. Total respect for a new legend... Gatesnbury hill.