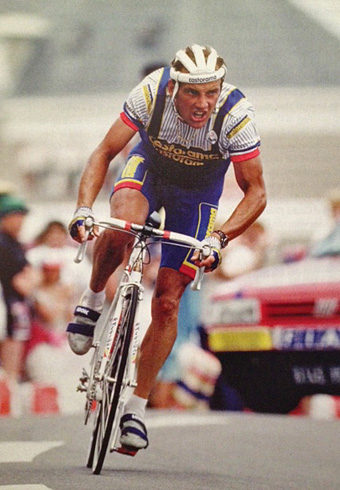 Whenever I'm out riding alone particularly long distance, I can't help but think of the extraordinary exploits of Thierry Marie. Known as a TT specialist, winning three Tour prologues ('86, '90 and '91) and wearer of the yellow jersey for seven days total. Appropriately nicknamed, The Dragster he was also known for one of the longest rides in Tour history.

I first followed the Tour in the early eighties; the Laurent Fignon era. Marie's career was majority at French teams notably to support Fignon through the System U and Castorama years ('85-'91). Cycling has many records. And, riding and winning alone is one of them. That's what transpired for the Dragster on stage 6 in 1991. And glorious still is that it was flat (259 kms) and hot. Marie tore off alone just 22 kms into the stage. The peloton didn't respond. LeMond was virtual GC leader, the previous leader, Rolf Sorenson, crashed the day before and abandoned. LeMond refused to don the yellow jersey out of respect for Sorenson and no way LeMond's Z team was going to chase Marie.

Time ticked away and Marie's lead was as much as 22 minutes. What's really interesting is what Marie does on his marathon solo ride. Watch the amazing video here. Note: Marital Gayant (Toshiba) and his steely will to keep riding after his crash.

The pack finally woke up and the gap closed to two minutes. But, riding solo was Marie's forte and he rolled across the line 1:54 ahead of the pack. My longest ride ever is 105 kms. His breakaway lasted 235 km and astounding 6hr 38min 27sec and average speed of 39 km/hr... that's a hell of a solo ride!