Look forward to the frighten thrill of it 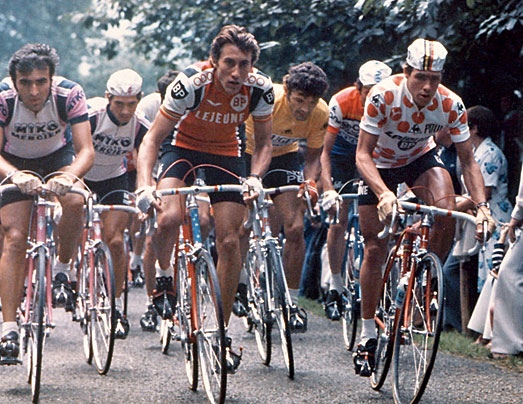 I thought I would never watch it again. I finally found CBS Sport's 1984 Paris-Roubaix on YouTube and very glad for it. You see this particular edition, narrated by John Tesh, opened the mysterious Paris-Roubaix cycling door for me. I remember watching in amazement of CBS Sport's 1983 Tour de France episode, blowing me away and wanting more. And world champion Greg LeMond woke up the American sports media as a genuine contender and was probably the catalyst for CBS to broadcast L'enfer du Nord. Sure the video has an American patriotism to it with anthemic music - but that's ok as the deserving Greg LeMond was their new cycling star.


"One hundred fifty-seven riders, their three thousand dollar machines pointed out of town on the way to Roubaix. Professional teams put together to work together and with one hundred sixty-miles no one claims victory alone."


"The velodrome in Roubaix and the finish so close now, but the last thirty miles are nothing but more bad roads and... bad dreams."

Give kudos to CBS for also giving fellow American - cycling pioneer Jonathan Boyer his due. Trailblazer Boyer was well ahead of LeMond establishing himself as an amateur for the Parisian ACBB club from 1973 and turned professional in 1977 with French squad Lejune-BP. But here he is riding for Italian squad Supermercati Brianzoli and refreshingly cocky. He already tasted les paves almost severing his nose in 1982. So are the lesser heroes of this great race. 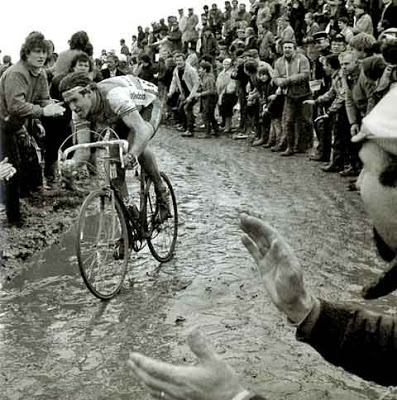 Alain Bondue (3rd place) lead and then forced to chase for victory,
afterwards revealed to riding on cracked forks.


For me, this American production was a breath of fresh air keeping a new cycling fan glued to the tv. Like most Canadian kids I was weened on hockey but I learned of and liked a new sport that day. I was riveted to Sean Kelly's superb Paris-Roubaix win. Jock Boyer had the right emotional response when interviewed before the race...

"I know I'm crazy but it doesn't scare me, no. Kinda look forward to the frighten thrill of it."