Stepping up for Michael Woods 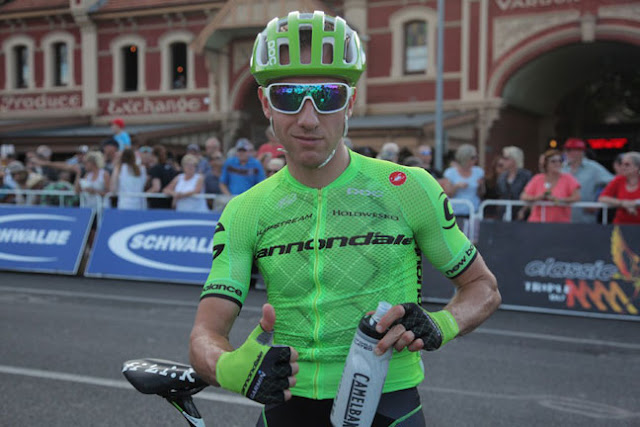 Thumbs up...
Michael Woods at the Tour Down Under
via thepelotonbrief.com

I've been following the uphill cycling path of Michael Woods. A fellow Canadian which I'm keen to support, and in pro cycling there's a small handful of Canucks in the World Tour. I can only think of; Hugo Houle (AG2R), Ryder Hesjedal (Trek-Segafredo), Svein Tuft & Christian Meier (Orica GreenEDGE) and Michael Woods (Cannondale). I hope I didn't leave out anybody. Michael Woods is late to the cycling game, and that's not a negative either. Many riders begin in their late teens/early twenties to pro cycling but Woods started as a successful middle-distance runner in his hometown of Ottawa. As the story goes, when he was 18 years old, he ran the mile in 3:57.48 took gold in the 1,500m at the Pan Am junior championships and remarkably had a world ranking in the top 50. Stress fractures in his left foot halted a promising running career. In 2011 he started riding and winning eventually stepping into Continental level in 2013. My good memory of this rider was his mountain top win in last year's Tour of Utah. Now, he's 29 years old and despite the 'old' age he considers himself a rookie pro... It's never too late.


"The progression has been pretty incredible. It's hard to believe, when I look back to where I was four years ago, working at a bike shop and riding for a local team, to where I am now. I'm getting paid to ride against the best riders in the world. it's special."