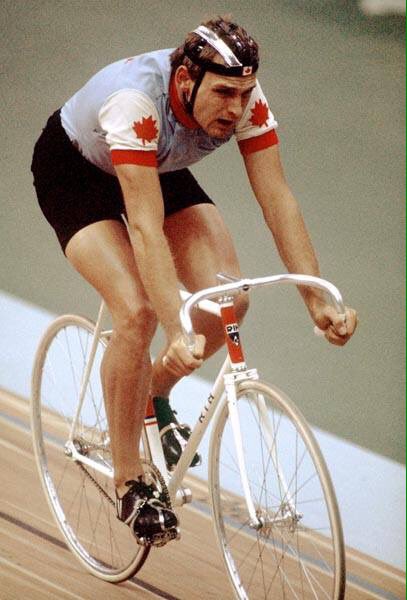 The first time I heard of Jocelyn Lovell was back in the 1978 Commonweath Games in Edmonton. He won a handful of medals in the track events namely Gold; in the Men's TT, 10 Miles Scratch & Tandem. As a newbie young fan of track racing I marveled at his skill and speed riding the 10 Miles Scratch, utterly amazing and memorable. He represented Canada in the 60s, 70s and early 80s with 35 national titles. And, in 1978 won a silver medal in the 1,000m TT at the Track World Championships in Munich. But his career ended with a dump truck while out training on August 4, 1983, resulting in spinal cord injuries leaving him a quadriplegic. I was glad that he was featured in the 2014 Marinoni: The Fire in the Frame. The excellent documentary of the great frame builder, Giuseppe Marinoni who built bikes for Lovell. The two are united in the film for a touching scene. I'm sadden by the news Jocelyn Lovell passed away on June 3... in his day, he was a fierce competitor and a Canadian cycling icon.