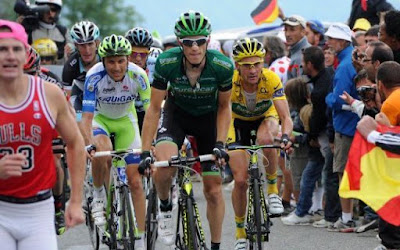 Huge opportunity for Nairo Quintana to distance himself from Chris Froome with high mountains this weekend. Today was through the cycling mad Basque Country, tomorrow is the hard Pyrenees on French soil for a four-climb tough fest with three first-cat climbs before the devil... Col d'Aubisque. Sunday is 2 cat climbs then up the cat 1 Formigal.

Quintana is only 54secs in front of Froome and he'll need to add at least double that before the 37km time trial in stage 19. I think Quintana can win this Vuelta. He's riding very well looks cool as a cucumber and I think will take time out from Froome. Most likely the two favorites will wait until the final climb up the Col d'Aubisque to duel it out. Contador is on the outside looking in and pressure is on him to attack, does he still have what it takes?...

It should be spicy racing. Tomorrow's stage mainly onto French soil should be an extra incentive for Pierre Rolland. I'll go for him for a French win on top of the Col d'Aubisque.