One more time at the GP Montreal 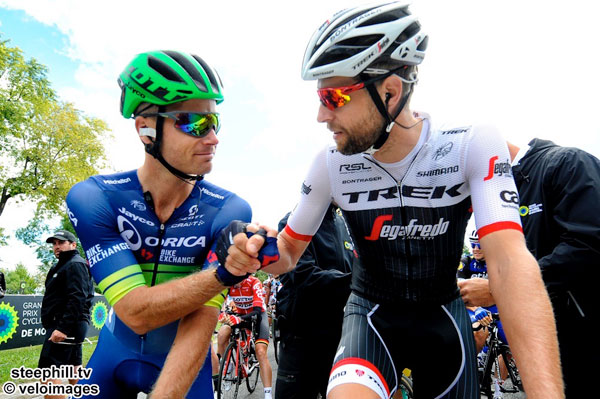 Christian Meier has announced his retirement after nine seasons of professional cycling. He will bow out after December and concentrate on his two coffee shops with his wife Amber in Girona, Spain; La Fabrica and Espresso Mafia. Ryder Hesjedal is also retiring at the end of the season and made it a go on the last lap but it wasn't enough to win in Montreal. Greg Van Avermaet out kicked Peter Sagan in a thrilling final sprint for the win. Hesjedal was five seconds off the winner to take top Canadian.

"I had a good time. I did what I thought I needed to do for the race and I couldn't ask for more than that. If you think you can best Peter and Van Avermaet and Diego Ulissi in a sprint to be on the podium, that's a tough call. I've been on the podium a couple of times here. I got my little bit. I really wanted to finish well in this race I like and with my Trek-Segafredo teammates, we tried to toughen the race in the last lap. I won't say I was expecting more. I'm the best Canadian today and it's not so bad."
- Ryder Hesjedal.

Canadian cycling may be losing the two veteran's but gaining in a good prospects; Ben Perry and Matteo Dal-Cin. Perry and Dal-Cin were among six riders that broke away on the first lap and took a six-minute lead. The lead group was reduced to four when it was caught with two laps to go. The twenty-two year old, Perry picked up points to take the king of the mountains award.

"For us, exposure like getting in the breakaway and winning the KoM was really big for our team. We probably would have lasted one lap less without Matteo out there. You can't expect me to compete with the Olympic and world champions, so we have to set more realistic goals."
- Ben Perry.