Meeting up with my old FRFuggitivi team mate Devin in Merrickville 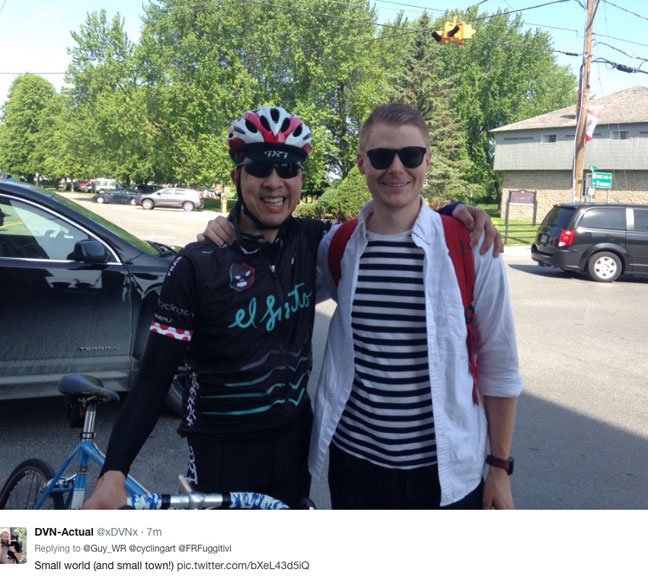 The day started warm with a forecast for a hot day. Reason enough to get an early ride with the hope of  adding some crucially needed kilometers. Ever since re-locating from Vancouver (last July) to the Ottawa Valley I've slowly discovered some fun and scenic biking routes. No high mountains here. Only scenic flat roads. Which is fine by me. I decided to head out on my current favorite ride to the picturesque UNESCO World Heritage site, Upper Nicholson Lock. I decided otherwise kept on riding  and passed by a group of cyclists on their way to Brockville. My 1987 Marinoni was the star and riders passed me and yelled, 'Nice bike!' I followed in the enticing wake of that peloton and then found myself in Merrickville. A slight detour for me but today was all about discovering. Then, from out of nowhere I heard, 'RICHARD!' I shrugged it off, it can't be for me. I don't know anyone from here, it was the first time riding through here.

Then my eyes popped out. I stopped and turn around and from across the street it was Devin and his wife and child. What a fun surprise! Of all places to find my old FRFuggitivi team mate who, by the way, was on his way for lunch with his mother. Devin is originally from Merrickville, on a visit and due to fly back to Vancouver later today. He noticed the FRFuggitivi team kit and simply yelled out to me. I wasn't sure how to get back and Devin and his wife gave me the perfect directions to get back on track. On his next trip we're planning on a ride, that I look forward to. And, it would be great to 'grow' the Eastern chapter of FRFuggitivi.

I'm sure glad I made the detour to Merrickville!