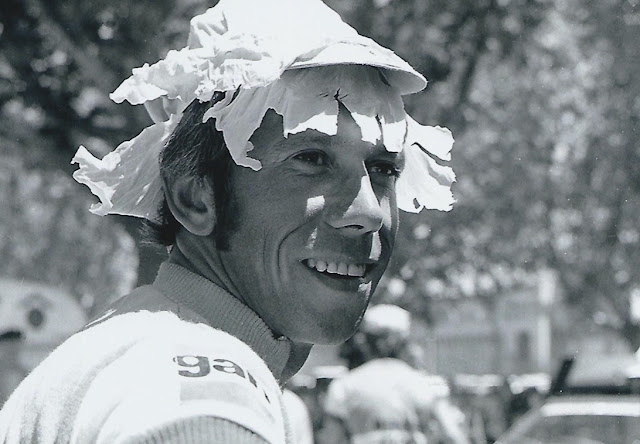 No, the cabbage leaves were not eaten. Barry Hoban, like all the pros then, used wet cabbage leaves to cool off in the hot conditions of the Tour de France.

I enjoy pro cycling's immense and quirky history. Part of its an illustrious history, and not often spoken, is nutrition.  One of cycling's heroes is Barry Hoban. He rose to fame in the late 1960s and early 1970s formerly holding the record for the most stage wins in the Tour de France by a British rider, winning eight stages. What was his nutritional regime, if at all, like? Here's his intriguing take...

"After each season ended, I would purge my system - I'd have a week where I would refresh my liver and my kidneys. For the first three days, I ate nothing and I drank a kind of Alka-Seltzer, really alkaline water. I didn't do anything physical at all, just lounged around and relaxed.

"On the fourth day, I started eating fruits: oranges, grapefruits, tomatoes, that type of thing. You could also drink certain herb teas. I drank cherry leaf, and blackcurrant leaf tea. By the end of the week, I was eating salads of grated carrots with celery, but no fancy dressing at all. Then you started training.

" For the rest of the time, I tried to eat plenty of good, wholesome food, but it was hard to eat well on some stage races. You were ok on the Tour de France, but we still made our own simple salad dressing and we never ate the center of white bread - two of our beliefs. The evening meal would be meat and usually rice, then a light dessert. But in other races, the Vuelta for example, the hotels weren't so good.

"Spain in the sixties wasn't the Spain of today. Hotels inland were poor and their kitchens were terrible. I took a big bag of my own muesli mix to all my races, so I could have a good breakfast, but when I saw what came out of some hotel kitchens, I'd just eat the rice. I'd asked to boil a couple of eggs, then mix the eggs with the rice, grate some cheese on top and eat that. I've ridden entire stage races on just muesli, rice, eggs and cheese.