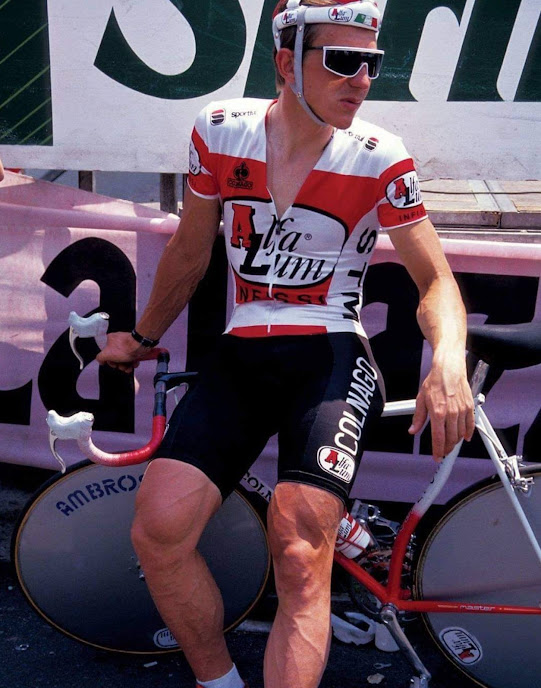 The future Flandrien, Andre Tchmil: 1989 Giro d'ltalia
Glasnost: Russian to mean "openness and transparency".
Back in the eighties, the Italian professional cycling team Alfa Lum (aluminum and windows manufacturer) was best remembered for introducing many successful riders from the former Soviet Union. The team was in a re-built mode in 1989-1990 and imported fifteen riders from the Soviet Union which decided to lift its ban on riders turning professional.
Notable riders introduced were Andrei Tchmil, Piotr Ugrumov, Djamolidine Abdoujaparou, Viktor Klimov, Dimitri Konyshev, Vladimir Poulnikov, Ivan Ivanov to the sport. Over the two years, the team had much success. Klimov held the leader's jersey for five stages in the 1990 Vuelta a Espana. Poulnikov finished fourth overall in the 1990 Giro d'ltalia. Konyshev finished second in the 1989 Chambery Road World Championships.
Alfa Lum folded at the end of 1990. Many of the riders moved to bigger teams and more success. Poulinikov and Abdoujaparov moved to Carrera. Abdou took the Green jersey in 1991, 1993, and 1994 Tour de France. Ugrumov won two stages in the 1994 Tour de France and finished second overall in the 1993 Giro d'ltalia. Konyshev was multiple stage winner in all three Grand Tours and third in the 1992 Benidorm Road World Championships.
Andre Tchmil went to ride for Belgian teams and won in the 1990s, winning Paris-Roubaix (1994), Milan-San Remo (1999) and  the Tour of Flanders (2000)... a true Flandrien.
Colnago favorite jersey's Flandrien look back steel love